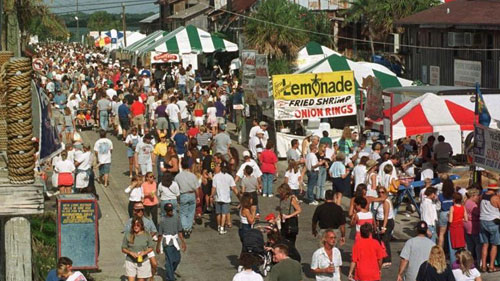 MADEIRA BEACH — After months of uncertainty, the City Commission reached a consensus at its March 26 workshop on a partnership agreement with the John’s Pass Merchants Association that would keep the annual Seafood Festival in Madeira Beach, at least for the coming year.

Though the agreement covers only the 2019 festival, it confirms a proposal outlined at February’s commission workshop that City Manager Jonathan Evans said “would ensure the event’s long-term success and viability.”

John’s Pass Merchants Association President Sonny Flynn said the agreement is “definitely doable.” Speaking of the Seafood Festival’s long-term value to the city and the John’s Pass merchants, she said, “We love our city. We don’t want (the Festival) to leave.”

The agreement contains some significant changes from past contracts. Before, the city waived the parking fees associated with the Festival while charging the direct cost to the event organizers.

Under the new contract, Evans said the city “will have exclusive rights and control over parking, but will not levy any fees associated with direct costs.”

A memo written by Evans said the city will “ensure that appropriate support services are provided, such as fire prevention, sanitation, road closures, and other ancillary costs.”

The costs typically run about $6,100, Evans said, and are easily affordable within the city budget.

The agreement is a trade-off, Evans said. Allowing the city to manage and operate the parking offers a significant revenue opportunity. Evans said the city can make a lot of money from the parking at John’s Pass Park and 130th Avenue. The plan is to charge festival goers a flat $20 parking fee rather than the $2.50 an hour meter rate.

Also, as part of the agreement, Evans said the Merchants Association will elevate the city’s sponsorship level of the Festival similar to a level of sponsors who contribute $25,000 to $50,000.

“We will be listed as one of the headline or top billing sponsors,” he said.

Evans said the new John’s Pass Seafood Festival partnership agreement with the Merchants Association offers the city “the opportunity to generate revenue that would offset the costs the city would incur, and forge that bond to be a genuine partner with the event organizers.”

Just as the commission appeared united in support of the proposed agreement, Commissioner Deby Weinstein raised an objection. She said she took offense to a letter written by Merchants Association President Flynn in early March that appeared on the NextDoor website.

In the letter, written on behalf of the Merchants Association, Weinstein quoted Flynn as saying, “I urge you to vote on March 12 and critically evaluate the progress Madeira Beach has not made over the last three years.”

Weinstein called the letter “inappropriate” and said “I’m tired of any association holding the city as what I call a ‘hostage’ in these types of events.”

She went on to say she thinks “the John’s Pass Merchants Association should pay the hard costs of the Seafood Festival, and the city should not give them any of the parking revenues.”

After hearing Weinstein’s comments, newly-elected Commissioner Doug Andrews said, “Wow! That is certainly conduct unbecoming a city official. You just trampled on her constitutional right to support a candidate.”

Weinstein got no support from the other commission members.

Commissioner Nancy Hodges said, “I believe there has been a lot of give and take on both sides. We need to bring this to an end right now, and go ahead and go with this agreement.”

When Mayor Maggi Black asked, “Do we have a consensus to approve the agreement?” there were no objections.

Black thanked Flynn “for all your hard work.” She told Flynn, “You are doing a great job. If you’re OK, we can shake hands and go forward.”

“We have a consensus to move forward. We will work out the nuances,” Black said.

On the contract agreement, Black said, “Both sides will gain from it and work together to ensure that this event stays here in Madeira Beach.”

The agreement will be ratified by the commission at their next regular meeting on April 9.

Led by Community Development Director Linda Portal, the commission took a look at stations where electric cars are charged, including how many are available, how often they are used, and how many are needed to meet current and future demand.

Madeira Beach currently has one charging station located at John’s Pass Park, Portal said. It is a Level 2 station, which most cities the size of Madeira Beach have. It can charge two vehicles at a time, with about 8 hours needed for a full charge.

Portal said electric charging stations are scattered among nearby communities. Treasure Island and South Pasadena have one each, Gulfport has two and St. Pete Beach has four.

Portal said the city could develop a standard for electric charging stations, deciding “how many we want, how we want them placed and where.”

The Madeira Beach station gets little use, according to aerial snapshots taken periodically of the site, Portal said. Commissioner Weinstein said she goes by the station several times a day, and sees it in use “not even once a month.”

Asked by Weinstein whether the station could be moved to a location where it would have more visibility, City Manager Evans said it should be replaced rather than moved. He said the station is near the end of its useful life and is not reliable. That was confirmed by resident Lawrence Brand, who said he has used the station many times, and found it to be “in disrepair and inoperable many times.”

The station “does not work half the time,” Brand said.

Evans said less than 2 percent of motor vehicles in the U.S. are electric.

Most people who have electric vehicles charge them in their garage, Portal said.

The demand for electric vehicles could soon increase, Evans said, due to events in China. There the government has placed a heavy surcharge on gas-operated cars. That could cause manufacturers to put more electric cars on the market and lower the costs, Evans said.

Black recommended the commission wait up to a year and revisit the electric car charging station issue, evaluating conditions in the market at that time.