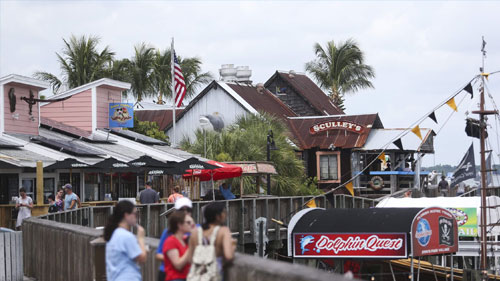 MADEIRA BEACH — Buffeted by storms and recession, the Marina at John’s Pass is getting a new lease on life.

“It’s been really neglected,” Mallah said of the marina. “We’re gonna come in, give it a bunch of TLC, clean and paint, get more stores and entertainment in there and get it like it should be.”

Mallah, who owns numerous properties throughout the Tampa Bay area, bought the 138,715-square-foot marina through the online auction site Ten-X. The property, part of what is commonly called John’s Pass Village and Boardwalk, had been marketed as an “irreplaceable waterfront location” that is Pinellas County’s No. 1 tourist destination.

Included in the sale was Hubbard’s Marina, named for a longtime Pinellas family that owned the entire marina from the mid-1970s to 2008. The Hubbards built a boardwalk and 325-space parking garage before lenders took over the marina after business slumped due to hurricanes and the recession.

“We lost the property in bankruptcy so during my tenure as vice president and majority owner of Hubbard we’ve always had a landlord, and the landlord was not easy to work with,” said Dillon Hubbard, who succeeded his father in the business. “So we’re very excited and feeling very positive about this change.”

“Anything you can think of on the water, we’ve got a boat to do it,” Hubbard said.

Mallah has often visited and calls a “great place.”

“We feel that we can come in and do what the previous owner wasn’t doing,” he said.”It’s a neighborhood and tourist meeting place close to our house so it’s easy to manage it.”

Mallah, who recently paid $16.5 million for a Belleair Shore mansion, said he plans to lease out the marina’s 5,000 square feet of vacant retail space and add more entertainment options.

“Maybe new high- tech simulation stuff,” he said, adding that he has also talked to a Largo company that makes amphibious vessels that can travel on both land and water.

“We’re trying to get more into local retail,” he said, “because we’re local and we like working with businesses here in town.